I forgot to post another one of my hair inspirations yesterday.  Frances Cobain’s hair made me decide to go for a change, but seeing this picture of Mila Kunis last week first made me start thinking of going darker:

I love this entire look, even though that dress (is that a dress?) may not be the most office appropriate… But most of all, I covet her hair.  Gahhh I want long hair.

I’d like to think my capricious and impetuous nature died along with my long-held teenage angst, but a part of it still exists.  For example, yesterday, I decided out of the blue that I really, really needed to do something about my hair.

I get bored with my hair very easily.  Naturally, I have the reputation in my office for always changing it.  But I hadn’t done anything to it in five months, which is the longest time that I can remember that I’ve left my hair alone, probably since early college. But yesterday I looked in the mirror, saw that it was at least five shades of brunette and blonde and thought, oh no. I need a change.  THIS isn’t working anymore.

I’m very naturally persuaded to change my hair by outside forces.  In 2005, I dyed my hair red because my favorite show at the time was Desperate Housewives.  Marcia Cross has such awesome hair and I coveted it. 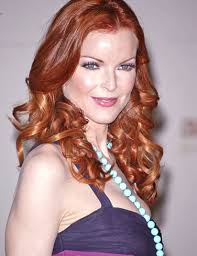 That was a very, very bad decision.  It turned out orange, and when my dad opened the door and saw me for the first time, he turned around and left without saying a word.

Back in 2009, I had dyed my hair reddish brown after a year and a half of being a blonde.  I was okay with this decision, until August, when I first started watching/became obsessed with True Blood.

Damn it, Sookie has amazing hair.  And after watching several episodes, I thought, “I need to be a blonde again,” and then stayed a blonde for the next year and a half.

This time, I knew I wasn’t going back to being blonde (oh, I still wish I had it every once in awhile though…too bad it murdered my hair).  But I thought I’d grow my hair out a little longer before going back to my stylist.  Then I saw this:

If you don’t recognize her, that’s Frances Cobain (I hardly need to tell you guys who she is).  She’s ridiculously gorgeous.  I wish I were that badass at eighteen, or even at my ripe old age of 27 (and I love the fact that she has tattoos of Jeff Buckley’s “Grace” on her arms.  Of course she would have a great taste in music).

But after seeing her photos, my supposedly mature outlook on my hair (“Let’s wait until next month, after you’re done with field work”) totally digressed into, “HER HAIR. I WANT HER HAIR.  TOMORROW.”

I love it!  On the outside, I’m this quiet, introverted person, but on the inside is a rocker who would just be happy listening to Deep Purple all day. And I feel like my hair finally expresses this, as opposed to the “LET’S GO TO THE BEACH YAYYYYYY” vibes that blonde hair gave me.

I feel like I will be satisfied with this hair for at least the next several months, at least until I see another hair inspiration that may make me think otherwise.

EDIT:  My lovely blog friends have asked to see a photo, so here I am cam-whoring it up.

I promise I am really excited about my hair, but smiling and posing for the camera seemed kind of ridiculous when you’re already taking pictures of yourself 😀

I still have a couple of days left in my field shift, but I decided to treat myself early with a little somethin’ somethin’ from this wonderful little Etsy shop I stumbled upon, ChrysDesignsJewelry.  The shop is full of antique looking charms and necklaces, for a ridiculously affordable price.  I am a sucker for pretty necklaces, and there are so many cute ones to choose from.  This one caught my eye:

The Navy has been a significant presence in my life, even if I am not actually in the military.  I’m the proud daughter of a Navy sailor and my dad’s best friend/my adopted grandfather was a Navy Seal in Vietnam. Without the Navy, my dad wouldn’t have met my mom.  I wouldn’t have been able to move to Texas and meet the amazing people that I have.  The Navy enabled my smart dad to get his college degrees (that’s right – degrees).  It’s even helping with my brother’s education – he’s able to use some of my dad’s benefits to pay for his schooling (lucky.  I wish I had that option when I was in college.  It sure would have helped with my student loans).

The Navy has done a lot for me and my little family, and I will be proud to wear this charm as a way to show my support and gratitude.

I’m going to go see a movie tonight, so I picked out a warm outfit since a cold front is coming in.  I picked a long-sleeved, black plaid flannel shirt and skinny jeans.  I put on my black-rimmed glasses and looked into the mirror. My hair is cut into a short style with bangs, and as I looked into the mirror and surveyed my outfit, I realized something.  I am dressed like a hipster.  Oh, dear God.

However, I like my outfit too much to take it off, and I know that in my heart, I’m not a hipster…so it’s okay.

Now excuse me as I go off to watch my pretentious arthouse film.

I was reading the December issue of InStyle magazine recently, and they were reviewing trends for the year. One that I was totally not aware of is “Ombre Hair,” as illustrated below.

The article made it seem like there is a fashionable, casual elegance to wearing your hair in this style. To me, the look more or less says, “Hey, I’ve been too lazy to get my hair done for the past six months, so I’m just going to grow it out now so the roots look as heinous as possible! Yeah!”

I’m always amused at how celebrities, who have all the disposable income in the world in which to look their best, enjoy forfeiting simple beauty maintenance techniques and somehow inexplicably start trends. I’m even more amused at the fact that fashion magazines then recommend these same trashy-chic trends to us plebeians; while they may make the celebrities look grungy-glamorous, they have the effect of making the rest of us look homeless.

I never quite saw the appeal of Taylor Swift.  I don’t have anything against her, personally, and I do like that one song she does, “You Belong With Me,” or whatever.  But I don’t look to her for fashion inspiration and generally avoid her music or any of the media hype associated with her.

I was looking through photos of best/worst fashion from the AMAs this year (because that’s a really constructive way of spending my time) and could hardly recognize her:

She looks incredible! I think she looks so much better with straight hair rather than curly, and her makeup makes her eyes look so much bigger.  My hair is pretty short right now, but when it grows out, I want this hairstyle.  It’s edgy and rocker chic, but so flattering.  It would take me probably two years to grow my hair this long, but if I do, I totally am trying this hairdo.  Well done, Taylor Swift.

I was in NYC two weeks ago (I have been delinquent in writing up my trip).  As I probably have mentioned multiple times, I loved it so much that I am wholeheartedly willing to leave behind the warmth of Texas, where my family and best friends live, and pack up and move.  I have already discussed moving there both with my cousin Amanda and close friend Meghan. I envision the three of us sharing an apartment (because how else will we be able to afford it?), three totally hip and fashionable single women, experiencing life in the Big Apple.  It would be kind of like Sex and the City, if you will, except far less sluttier.

Anyway, I went shopping when I was there and bought these boots. I was completely inspired, not only by my very chic cousin, but by all the fashion I saw in the streets. I felt like I was looking through the September issue of Lucky.   Such inspirational looks.  The women on the East Coast, especially in New York, are effortlessly chic.  There is minimalist feel to their looks, which really appeals to me – I’ve never been one to accessorize.  And the boots – every woman wore a different pair of stylish boots. I coveted each pair I walked by.  So when my Zia Lucia pointed to a pair of $30 boots in a shop in Manhattan, I didn’t pass the opportunity up.  Looky:

They are pretty comfortable and have this rocker edge to them.  What you don’t see is this prominent zipper along the side (it’s just there for show, as the salesman informed me as I tried yanking it down to put my foot in).

I love these boots.  Love them.  I look at them and love them because I can say that I got them in New York, because it reminds me of shopping with my aunt and cousin.  I have already worn them many times since I’ve been back.  This is no small feat.  For one thing, it doesn’t really get cold in Texas until late November, maybe December.  It’s hard to predict when exactly it will be cold, which is why I have been wearing my boots frequently.  Who cares if it’s 80 degrees outside?  It’s November, which means it’s autumn, which is boot weather in my book.

I wore my New York boots on Thursday. I wore them with skinny jeans, a sleeveless tank, and a cardigan sweater over it. Again, it was like 80 degrees outside, but it’s cold in my office, so whatever.  I took a lunch break and went to Jimmy John’s.  The man at the counter asked me a question that sounded like “White Horses,” and that confused me, because it didn’t sound like a menu item.  “Huh?” I said.  “Do you ride horses?” he asked.

It took me a second to realize why he’d ask that.  “Oh…no,” I replied.

Then later on at drum lessons, my teacher pointed at my boots and said, “Do you ride motorcycles?”  Since this is cooler than riding a horse, I gave him the full explanation.  “It’s a fashion statement,” I said.

I’m just amused when men assume that we choose an article of clothing for utilitarian reasons, when girls really just want to have fun.

Don't Call Me Cute
Create a free website or blog at WordPress.com.